By Outpost MediaMarch 9, 2015 No Comments

Pulling from various influences as disparate as Tenor Saw, The Shirelles, Wiley, Jimmy Cliff, and Black Flag, ‘FM’ is The Skints’ fitting tribute to the radio culture they love as music fans. Progressing through the bubbling sound of grime and garage to summertime sound system reggae, roots, dancehall, traditional rocksteady, Motown soul and punk, the group takes listeners on a whistle-stop tour of the capital’s underground culture.

To celebrate the release of ‘FM‘, the reggae four-piece will play a series of shows across the EU and UK in March and April, where they will be joined by support from tropical pop-dub singer-songwriter Hollie Cook.

Hollie Cook, daughter of Sex Pistols’ drummer Paul Cook, rose to fame following her self-titled 2011 album, which introduced her as one of the most exciting new female talents on the London scene. Her support slot for The Skints will mark her reunion with the band’s own Marcia Richards, a talented multi-instrumentalist (keyboards, saxophone, melodica, flute and guitar) who has played keys for Hollie as part of her live band in the past.

A group renowned for their live performance credentials, having finished 2014 on the road with the Jägermeister Music Tour alongside Me First and The Gimme Gimmes, The Skints truly show no signs of slowing down. 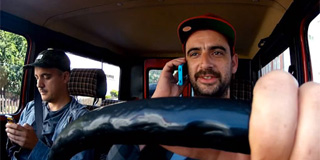