By Outpost MediaDecember 3, 2013 No Comments

Traditionally, if you wanted to hear a live set by a band or DJ as it happened, but weren’t actually able to get to the venue, you’d have to hope that it was being broadcast on the radio. It’s not uncommon, but in the grand scheme of things you’ll be lucky to catch a great deal of those shows you just didn’t get around to buying tickets for – especially if you’re looking for anything less than a household name.

Of course, like most things in the music world, the internet has changed this. The music video has become the hottest commodity in music, and now every artist is able, fairly easily, to get some sort of video content online. It’s reasonably inexpensive to get a reasonably good, if a little basic, video on YouTube, and bands and fans alike share live recordings every day of the week (some better than others).

Because of this, artists are continually having to step things up in order to stand out. Recently Pharrell Williams released a 24 hour video, which saw his track ‘Happy’ on a constant loop, synced to a different celebrity dancing and singing along each time it began again. Bob Dylan has also got in on the act, putting out an interactive video for ‘Like A Rolling Stone’ with a similar theme. Dylan’s video allowed viewers to switch between sixteen channels, each with a different person lip- synching along.

But while there is much innovation still going on in standard music videos that run from beginning to end when you hit play, it’s livestreaming that’s the real emerging medium for engaging and interacting with fans. And while pretty much anyone can get a bit of decent video content online, livestreaming is a different thing altogether. For the most part, it still requires gatekeepers to facilitate this. Boiler Room is a perfect example, bringing live DJ sets from around the world to music fans in their own homes. It’s more prolific and has a wider selection than, say, Radio 1, but there’s also a selection process that means it’s not for everyone, artists and fans alike.

There are artists who have been sidestepping the gatekeepers and livestreaming themselves for more than a decade now, but as streaming becomes the norm for all forms of music consumption and technology improves, soon it will hit the mainstream.

For a time, Ustream looks like it might be the turning point in this area, but it was perhaps a little ahead of its time. Sometimes, it takes a big player to move at the right moment, and that’s what makes YouTube’s increased provisions for livestreaming so interesting.

The platform has live streaming options for large events for some time now, the video feeds from the Coachella festival over the last few years being a prime example, but earlier this year it opened this up to more accounts. Users must apply to have this option added to their accounts, but once its available, setting up a live broadcast is fairly simple (YouTube will even provide some of the backend technology, if you don’t have it available).

YouTube has also recently stretched the idea of what an online broadcast can be, with its YouTube Music Video Awards seeing artists and video directors creating ‘live music videos’, performed, acted and filmed on stage. Meanwhile, Lady Gaga livestreamed her recent ‘artRAVE’ – the multi-million dollar launch party for her new album, ARTPOP – on Vevo.

Not quite livestreaming, but another very interesting innovation in online live music broadcasting, is Soundhalo, which provides downloads of live video and audio recordings in (almost) real time to paying users via a mobile app. The service provides fans who attend shows with a high quality memento of the performance, and allows those not their to experience it as it happens and again whenever they want.

The app launched at Alt-J’s Brixton Academy show in May (and later used by Atoms For Peace), with the band’s Gus Unger-Hamilton saying: “I think the future of music and technology as an artist, and looking at how artists and fans interact, is really exciting. Artistic output no longer has to be dictated by the things it used to be. It used to be how much music can you fit on a vinyl record? And how long is a video cassette? Now that no longer has to be the case.”

Of course, the level of production required for full scale video broadcasts like this is still way beyond what many artists can afford to produce (particularly at the YouTube MVAs and artRAVE end), but a simple set up can prove very effective too. As more and more artists begin producing their own video content, artists need to find new ways in which to stand out. An acoustic performance videoed and put online at a later date remains a nice extra for fans, but an acoustic gig broadcast live at a specific time creates an event and builds a buzz.

Similarly for DJs, only a fairly simple set-up is required to broadcast a live set, one camera and sound plugged through a laptop and online will give people an insight into what they could have been enjoying in person.

If an artist still feels that they don’t have the technical set-up to provide a video feed that properly represents them, live audio is still an option, and one much easier to provide. Services such as Mixify provide the tools to broadcast audio live and allow fans to listen via their computers or mobile phones instantly. And, like with YouTube, if a big player such as SoundCloud was to begin offering this, it could be a real game changer. 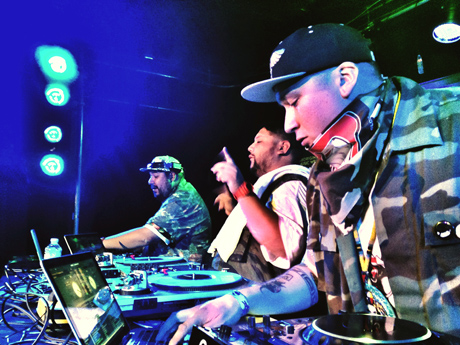