The UK music industry has been instrumental in breaking internationally-renowned artists, creating innovative genres and fostering burgeoning music ‘tribes’ for decades, and this year marks the 50th Anniversary of The British Invasion.

When The Beatles infamously touched down in New York City on February 7th 1964, there emerged with them a legacy that would shape not only the future of rock ‘n’ roll, culture and fashion, but also kick-start a new era of freestyle dance.

In 1964, this dance revolution was in its first stages of infancy. Traditional rules and restrictions were becoming blurred in favour of a progressive, freeing sense of spontaneity. For the first time, everyone was dancing solo. People embraced their own space, liberated from the limitations of having a partner dancing close to them in formalised moves – suddenly the steps weren’t as important as your own interpretation of the music. Men and women on dance-floors across the Western world were shimmying, hip-swinging, strutting and twisting in a way previously unprecedented: it was all about ‘letting go’.

MacarenaAnd the revolution hasn’t stopped there. Dance fads have come and gone, from the ‘Walk Like An Egyptian’ whim of the 80s, the ‘Macarena’ moves of the 90s, through to the noughties’ ‘Las Ketchup’ love and 2010’s ‘Gangnam Style’ craze, but the individuality of freelance dance remains strong. Today, the British music scene is still flourishing – and so is our ability to let loose and throw a shape or two.

Re-capturing the high spirits of the 60s are emerging British acts representing the sunfilled-soul of reggae and ska, including ‘Future-Ska’ quintet LazyTalk and The Skints. Then there’s the flamboyant ones who meld nostalgic sounds with indie rock and drum’n’bass to give us something completely new. Take ‘Gypstep’ six-piece Molotov Jukebox for example, or renowned live act The Correspondents, both of whom combine eclectic sounds with energetic performances in unique genre hybrids that defy what’s gone before.

Both LazyTalk and The Skints blitz a very British blend of Indie, Ska, Punk, and Drum ‘n’ Bass with distinctive ragga vocals. LazyTalk’s sound is inspired by frontman Piers Robinson’s experiences on the London Jungle scene, spitting sounds at raves across the capital. Their authentic approach and thumping beats has seen them headline Scala, appear at Leeds Festival and support Babyshambles on their UK tour – and they never fail to get a crowd on their feet. The Skints have built up similar repute on the live scene. Their unique blend of reggae and indie never fails to rouse an audience – an ability which has seen them sell out the iconic KOKO venue.

Chances are that anyone who has been to a festival over the past four years has stumbled across The Correspondents. They have been near-permanent fixtures on main stages across the globe, but they have left it until now to release their first LP. ‘Puppet Loosely Strung’ is set for release on 10th March, and is already eagerly anticipated by the charismatic duo’s legions of fans – fans that have been won through their dedication to putting on a jolly good show. Frontman Mr. Bruce has become known for his extravagant stage persona, his exquisite outfits and frenetic dance moves. With excitement building around their first album release – the question is: can an act renowned for their energetic performances translate their dance-inducing live sound onto record? While some acts struggle to do so, early critical praise suggests that all the wit, humour and energy of The Correspondents’ live show has been poured into a sublime debut release.

Watch The Correspondents’ Mr Bruce in a freestyle dance-off:

Molotov Jukebox, fronted by multi-talented singer and actress Natalia Tena (Harry Potter and Game of Thrones), have juxtaposed elements of Gypsy, Swing, Latin Soul, Calypso and Dubstep to build an inimitable reputation for their quirky style.
The dynamic group have also become internationally renowned for their sweat-filled, dance-inducing live shows, which have led to them supporting Kings of Convenience, Beirut and Skrillex. Their love of dance was highlighted in their accompanying video to 2011 single ‘I Need It’, which embraced the cultural fad of Chat Roulette by encouraging fans to show them their best moves. Holding up handmade signs to the camera saying ‘DANCE’, the band were filmed performing to dozens of online viewers in a variety of amusing outfits, perfectly capturing the fun nature of freestyle.

Adam of Molotov Jukebox says of ‘Neon Lights’, an ode to ‘Mother London’ from their forthcoming album ‘Carnival Flower’:

“I wanted the drums to sound somewhere between a punchy dub step kick and a big old rock band sound – both being famous London exports, it just kinda rang true with the song!”

While all these groups display their own distinct take on alternative dance music today, it’s clear that their sounds remain proudly reflective of their British roots. In an increasingly creative society whose mode of musical expression is constantly evolving, this is truly the time to embrace freedom of form, genre and style – and break out some new moves in the process. 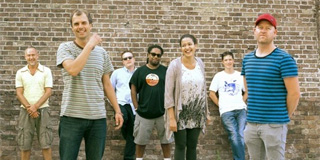