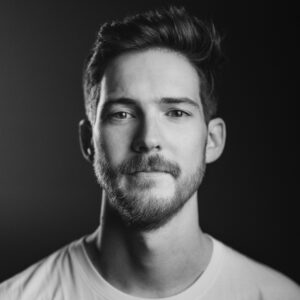 Continuing where the last single, ‘Pilot’, left off, ‘Repair’ aims to open up and discuss the rulebook on unhelpful behaviours relating to hidden sexuality and masculinity. Atmospheric keys that shimmer and delight perfectly match Joe’s crooning vocals and create an unforgettable pop song that unmasks tender strokes of truth and vulnerability.

Used as a coping mechanism during the time when Joe was hiding his sexuality to the world, ‘Repair’ is another cathartic experience from the professional comedian and musician.

“Repair essentially opens up a rule book of unhelpful behaviours I had given myself through hiding who I was. It’s a bit of an ode to masculinity. I love the

more masculine tropes of my personality, but it became a bit of a uniform through my early teens and twenties.”

This song also touches on body confidence and constantly wanting to change my physique and get thinner. I suppose now I’m working towards embracing who I am and am a lot happier, it was quite cathartic to revisit who I was a few years ago and write a song from his perspective”

Originally from Weston-super-Mare in Somerset, now based in London, Joe has been playing piano and making music since the tender age of five. With a grounding in jazz piano and a diet of alternative music during his teens, songwriting is in his blood. He has always been deeply inspired by a number of genres, most prominently the local West Country delicacy of trip-hop.

Whilst he covers the important subject matter of homosexuality throughout the upcoming debut album, Joe doesn’t like to take himself too seriously. The album, mastered at Abbey Road by Andrew Walter (David Bowie, The Who, Coldplay, Radiohead), looks at the last decade visiting key moments of Joe’s life since coming out. It gives honest account of alienation through homosexuality, unrealistic expectation of success, the breakdown of relationships, repression of masculinity, self-doubt, and anxieties around body image. It’s an reflection on what it was to be a gay man growing up in the 90s and early 00’s, full of slightly sarcastic and humorous moments, rounded with a hard hit of reality.

‘Repair’ is available on all digital platforms on September 17th.