We hope you had a lovely Christmas and saw 2014 in with style. So it’s that time of year where we all make some resolutions with the best of intentions – perhaps you’ve given up drinking or smoking or promised to brush off that gym membership card that’s collecting cobwebs in the depths of your wallet. Well, one thing you don’t need to hold back on this month is great music (do you see what we did there?) Outpost are starting the new year with a roster of incredible artists and releases and we’re very excited to be able to share them with you.

Ministry of Sound’s series of iconic ‘Masterpiece’ compilation albums continues its lofty esteem this year, as the next edition, curated by legendary deejay David Rodigan MBE, is set for release on 27th January. Famed for championing Jamaican music in the UK, this new collection of tracks is a deeply personal reflection on the music that has thrilled and inspired him throughout his life. Passing from the sounds of Sixties British pop and American soul through to the evolution of Jamaican music in all its guises across four decades, this album truly is a masterpiece and traces not just Ram Jam’s personal musical journey, but also the unmistakeable impact he has had on the British musical landscape.

The album is available to pre-order here

With Kendra nominated as one of Outpost’s ‘one to watch’ in our Christmas newsletter, she has really delivered (if we do say so ourselves!) The lead single from her album, ‘Concrete Waves’, was exclusively aired on Lauren Laverne’s BBC 6 Music show and her personal playlist. The remix of ‘Concrete Waves’ by DJ Premier, who has recently remixed Disclosure’s ‘Latch’, was premiered by Huw Stephens, BBC Radio 1. With great support already for the single, Kendra’s debut album ‘Banshee’ is set to follow in the same great footsteps. With this release, Kendra has created something which encompasses old and new, whilst at the same time still managing to display spectacular originality and emotion.

Lauren Laverne, BBC 6 Music: “I absolutely love this track, I love it, I think it has a very cinematic, David Holmes-y feel. We do hope to hear more of her in 2014.”

Having built up some irrefutable renown on the live scene, quirky genre-mashing duo, The Correspondents, are preparing to release their debut album ‘Puppet Loosely Strung’ in March. Lauded by fans and critics alike, they’ve received noteworthy acclaim from the likes of The Telegraph, who twice listed the twosome on their Glastonbury highlights rundown, and the BBC, who included the video for their most recent single, ‘Fear and Delight’, as part of their Music Video Festival, celebrating the very best in music visuals. They are lining up to release their next single, ‘Alarm Call’ at the end of January, with proceeds from sales of the single going towards the Epilepsy Society to help continue the amazing work that they do.

Watch their amazing video for ‘Fear and Delight’ here

7 piece London hip-hop outfit, Lazy Habits, return with an album of exclusive remixes of tracks from their debut eponymous album ‘Lazy Habits’ via Run ‘N’ Jump Records this March. Outpost first worked on their debut album in 2013, alongside their UK tour, and exposed the collective to tastemakers such as The Skinny, Mixmag and The Evening Standard. The remix album works as an evolution of their debut (which was the perfect emulation of the band’s epic live credentials and their trademark big band and hip-hop sound). It sees a host of exciting remixing talents put their own spin on Lazy Habits’ original tracks, creating an album which sounds refreshingly unique, while maintaining the infectious spirit of the group’s first record.

Watch the video for The Disablists’ remix of ‘Ashes’ here

King Midas have been making waves in their native Norway for a long time now, with their most recent LP ‘Rosso’ being nominated for ‘Best Rock Album’ at the Spellemann Awards – often dubbed the ‘Norwegian Grammys’. Six years in the making, ‘Rosso’ is the band’s most personal album to date and it is set for an international release on March 3rd. Prior to this, they will be releasing their new single, ‘You Know My Name’, on 10th February.

Listen to ‘You Know My Name’ here

Outpost are also happy to announce that we will be working on a campaign for Bulgarian soul sensation Ruth Koleva. Having been championed by Mark Ronson and become a spokesperson for the best of Bulgarian – being the youngest recipient of Bulgarian Grazia’s Woman of the Year award – she has her sights set on the rest of the world. Drawing comparisons to Jessie Ware, Ruth looks set to launch onto the international scene with her stunningly warm vocal style. ‘Ruth’, the album, is set for release at the beginning of March, with lead single ‘Turn This Around’ out on February 3rd.

The Deep Heads label has garnered a more than impressive online following over the past years and has become one of the forerunners in releasing and promoting quality, bass-driven music. Outpost have teamed up with the label to work on the release of a new single produced from a collaboration between Congi, Occult and singer-songwriter Segilola on vocals entitled ‘Same Kind’. Imbued with warm production and emotive vocals, it’s a brilliant showcase for the talented musicians and for the label, which maintains its reputation for bringing only the best in new music to the public.

After witnessing their memorable support slot for Babyshambles late last year, Outpost chased the Lazytalker boys and are looking forward to being involved in their journey. Fusing reggae, ska, punk, rap, drum & bass & more; a band with a message, making beats you can dance to. They call this sound Future Ska, whatever you want to call it, it will make you want to dance. We will be working a press, radio and online campaign on a free download of ‘Memories’ and their latest single, ‘Just A Ride’.

Silver Man… who is this mysterious, enigmatic man who has recently been featured in SupaJam and is set to make the big time in DJ Mag next month? Any ideas? We’ll let you in on a secret.. .Silver Man’s is Outpost’s very own David Silverman. Giving up the dream of becoming a producer in his late twenties in favour of building one of the UK’s leading Music PR companies, ‘Analog X’ is the first single taken from the collection of unreleased tracks that comprise the forthcoming album, ‘Thieves and Millionaires’, out in March 2014.

Coming up next month…

Outpost are also excited to announce that February will see us working campaigns for the following:

With some great artists under our wing, Outpost are very much looking forward to what 2014 has in store – and with a host of fantastic events coming up early in the New Year, we really are feeling giddy with excitement. Here’s why:

David ‘Ram Jam’ Rodigan MBE will be taking to the decks at an exclusive album launch party for his ‘Masterpiece’ compilation being released via Ministry of Sound. The launch is to take place at the intimate Basing House venue in East London on February 5th. For a limited guest list spot, please email mel@outpostmedia.co.uk

Ahead of the release of their next single, ‘Alarm Call’, The Correspondents will be revealing their astonishing new music video on 30th January at an exclusive exhibition, in collaboration with the Epilepsy Society. The video utilises stop motion and time lapse video techniques to depict the story of two men growing up alongside one another over the course of 20 years through a series of layered oil portraits by lead singer Mr Bruce and it will be made available simultaneously online.

What are you most excited about in 2014? What is your signature dish? 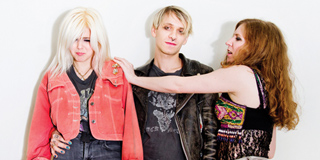