Since then, Gaspar has caught the eye of numerous tastemakers, landing Mixmag’s New Artists in January 2020, as well as blog support from EARMILK and Acid Stag and Spotify Editorial playlist spots including New Music Friday UK, Mellow Mood, Our Generation, and Garden Indie.

His EP Transatlantic is released on June 5, 2020 via Radicalis. 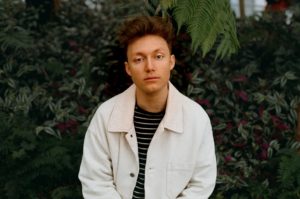 Gaspar Narby’s upcoming EP Transatlantic, to be released on June 5, 2020 is a contemplative body of work written about long distance relationships.

An EP is a body of work that usually marks an end of a chapter and the beginning of another. None more so than the Transatlantic EP by Gaspar Narby, which thematically contemplates the highs (and indeed lows) of long-distance relationships.

The project crystalised over a period of a year, at a time when Gaspar was in a long-distance relationship with his then-girlfriend, who resided in New York City, whilst he lived in London. Unfortunately it ended with a breakup, and he recalls the making of the EP an extremely solitary process from start to finish, “You can try as hard as you can, and it can be very difficult when it fails”.

The EP commences with Sit Here, which lyrically explores the theme of love through the lens of a long-distance relationship. The first track he wrote for the EP, Gaspar takes a more acoustic and spontaneous approach than his previous releases. Laden with vocals, he recorded most of the vocals on a cassette dictaphone or on his phone, which he then doubled up with an analogue mic.

This feeling of lo-fi rawness continues throughout the EP, as Gaspar nostalgically contemplates the rollercoaster ride of teenage love. The almost upbeat second track Eighteen is quickly followed by so-so, recorded at a point where Gaspar was feeling especially low. He explains, “I think ‘so-so’ was actually what allowed me to move on from certain things. Being able to say “hey, I feel like shit, and it’s ok”, and to finally admit to myself that I was unwell felt super freeing.”

His current single, Sirens, was inspired during a near miss car crash with his friend, who was driving at the time. Narrowly avoiding a frontal collision, Gaspar subsequently dreamed of this sequence on numerous occasions, and in his dreams, the accident always happened. This song is about the accident in his dreams. He kept the original demo – recorded on a 4-track cassette deck – in the final version.

Friend is about coming to terms with himself, in order to come to terms with everything else. It was a promise to at least try to be kind to himself, something which he says can be extremely hard for his generation who can often have a lack of meaning in the world. Gaspar contemplates, “I often wonder whether this generation is doomed”, as suggested in the fifth track off the EP called, I Know.

The Transatlantic EP is out on June 5, 2020 [preview here] along with the single Sirens.

Still a relative newcomer in the scene, the 23-year-old Swiss multi-instrumentalist, songwriter and producer has worked with Claire Faravarjoo (The Voice, France) and rising artist Imogen.

Since the release of his debut single Home in the Summer of 2017, Gaspar has caught the eye of numerous tastemakers, landing Mixmag’s New Artists in January 2020, as well as blog support from EARMILK and Acid Stag and Spotify Editorial playlist spots including New Music Friday UK, Mellow Mood, Our Generation, and Garden Indie.

Gaspar is working on more material – expect a single release in the Summer, followed by a collaboration EP.